This tradition began when a cadet officer in the Merchant Navy brought back a series of “B.P.’s – Scouting for Boys” publications from the UK in 1908. Cyril Kimber and eight of his friends then formed a Scout patrol which quickly grew to become 1st Brighton Scouts. The first meeting place for the new group was in stables in New Street, Brighton. John Boardman was the first Group Scout Master. (John Boardman Jnr, his son, is still an active member of scouting today). By 1916, 2nd Brighton was formed at the Melbourne Orphanage in Dendy Street, Brighton, followed by 3rd Brighton in 1920, which resided at Lindsay Street, Brighton. 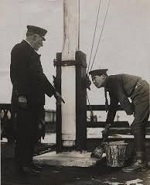 With a strong desire to have a permanent home of their own, they sought and received strong support from the local MLA, Mr Snowball and the Town Clerk, Mr JH Taylor. The Town Clerk then arranged a Civic Carnival which raised 300 pounds to purchase our current site at 34 Wilson Street, Brighton. A further 350 pounds was allocated to the building of the hall. This was completed by voluntary labour and was ready for the Troop to move in by November 1924.

In 1938, with the blessing of the city father, 1st and 3rd Brighton amalgamated to become 1st / 3rd Brighton (Mayor’s Own) Scout Group.

In 1940, the Cub section was so strong that there were two packs, namely “A” pack and “B” pack. One pack was under the leadership of a Miss Hazel Methven, and the other pack into which I was enrolled, led by Mr Brian Heddle. Both packs were very active, and participated strongly in Brighton District events. 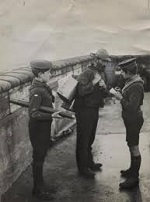 Some of the older scouts in 1st / 3rd Brighton Troop volunteered to be messengers for the local “ARP (Air Raid Patrol) and riding their bicycles, passed messages from the ARP Patrols to their Headquarters, as practiced in case the war came to Brighton. They also practiced lowering Scouts out of upstairs windows of the hall on stretchers, wrapped in bandages and splints as practice for the local Red Cross volunteers. When the Group decided to form a Rover Crew, there were a number of older ex-members of the Group who came along with renewed enthusiasm. They were soon joined by scouts from other Brighton Scout Groups, who did not have a crew of their own. Three scouts came from the 11th Brighton Sea Scouts and they also came from 5th Brighton (St Luke’s Own).

By 1945, the crew was getting actively involved in snow-skiing. The Crew had access to a supply of Kiln-dried hardwood boards which we steam-bent and fashioned into very serviceable skis. Each participating Rover took his own pair of skis and was responsible for them, and they served well over the years to come. All of the Rover crews in the Brighton District were part of the Metropolitan Rover Scout Organisation. 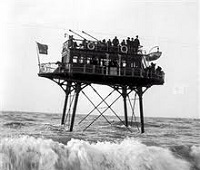 The Group was very active in working bees, bush walking and snow skiing and had a wonderful skiing chalet on the Bogong High Plains. Each winter, the Metropolitan Rovers took two parties to the Bogong Chalet, the first party for the first two weeks in August, and the second party for the last two weeks. The Dudley Family had a very close association with the Blackwood District, dating right back to the discovery of gold there in the mid-1850’s, and Skipper Dudley had built a log cabin there in 1935. It was natural then that he took the Rover Crew up there to the cabin, and the Crew did many trips into the Lerderderg Gorge and over a three day period, walked right into Blackwood. 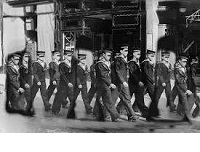 It was decided by the members of the Crew to build their own log cabin at Blackwood and Skipper Dudley obtained a Permissive Occupancy Lease from the Lands Department in the name of 1st / 3rd Brighton Rover Crew. The Crew then proceeded to build a log cabin on this site, able to be used by arrangement by other Rover crews. By unanimous vote, it was decided to name this cabin “Snooks Nook”. Bill Snooks was the Group Scout Master for 1st / 3rd Brighton Scout Group and very much admired by all sections of the Group. The Rover Scout hut at Blackwood was officially named “Snooks Nook” by members of the Rover crew on a very special day and attended personally by Bill Snooks. 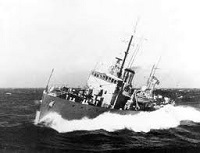 When the Pan-Pacific Jamboree was planned from 29th December 1948 to 9th January 1949, the Metropolitan Rover Section was seconded to manage Traffic Management. As the Jamboree was held at “Yarra Brae” in Wonga Park, this was a very big responsibility, but the Metro Rovers carried this out in a very capable manner. The Jamboree was graced with the presence of Lord Rowallan, who was the World Chief Scout. To welcome him to the Jamboree, the Rover Section built a very substantial raft and floated Lord Rowallan down the Yarra River.

There was at the Jamboree, a big contingent from Malaya, and the Malaysian Scouts gave a very special musical performance at the Jamboree. After the conclusion of the Jamboree, the Malaysian contingent spent some time at Brighton, and gave a very stirring performance at the Brighton District Gang Show at the Brighton Town Hall. The group remained as 1st / 3rd Brighton until 1983 when 14th Brighton also amalgamated with the group to become what is now known as 1st / 14th Brighton (Mayor’s Own) Sea Scout Group. The group today currently consists of over 200 youth and adult members. We are also very fortunate to still have the current Mayor from the City of Bayside keeping the Mayor’s Own tradition alive that commenced back in 1924 by involving our group in community ceremonies.